The first digital release was published in 2006, and the flow of music has kept steady ever since. During its first years [贸wt kr矛] created and released a number of online- and CDr-releases, and took part on a multitude of compilations.

In 2013 the project took a giant leap further when Alrealon Musique published [贸wt kr矛]'s debut CD-release "The New Seed", which introduced the project to much greater attention and appreciation than before. The rolling snowball kept on growing, and already in 2014 [贸wt kr矛] played its first live show in Finland and a couple of shows on the east coast of the US. The smaller-scale releases of 2014 (published on cassette and digitally) showed the artist pushing the boundaries of his creative expression, and demonstrated that his creative hunger was far from satisfied.

During late 2015 that [贸wt kr矛]'s second CD-album became reality. The album called "Pilgrimage" was published by Erototox Decodings in beautiful digipak packaging. As icing on the cake, the album's soundscapes were perfected by the mastering of Dan Swan枚, the Kenneth's long-time musical hero.

In 2016 [贸wt kr矛] performed live more than ever before, playing multiple shows in Sweden and Estonia in addition to domestic performances. He's played a multitude of domestic shows since 2017, including many events that Kenneth was the co-organizer for.

In November 2018 [贸wt kr矛] released a 3rd CD, a self-released album titled "Ximenes", through his Bandcamp page.
[贸wt kr矛] has since then collaborated extensively with UK based netlabel Sombre Soniks and released two limited edition CD-r releases through Australia based micro-label NCTMMRN.

Through the year 2020 [贸wt kr矛] worked in the studio to create his upcoming album "Shards". The album set in stone [贸wt kr矛]'s cooperation with the Finnish label Signature Dark.

In 2022 [贸wt kr矛] also collaborated with Unexplained Sounds for various released and upcoming compilations.
As of 2022 [贸wt kr矛] has also done a series of live concerts accompanying the music of Edvin Sora in duo and trio lineups with Edvin Sora on guitar and vocals.
www.owtkri.org

Kenneth Kovasin is a Helsinki/Finland based Sound artist and musician. He is best known for his extensive work in the realms of Ambient and Dark Ambient music since 2005.
He has also worked on composed material and ultimately participated in the 2011 Joensuu Soundscape composition contest with a piece called "Local / Global / Decline / Survive".

A common nominator for Kenneth's compositions and sound works has been sampling and usage of found or recorded environmental sounds and heavy usage of reverbed effects.

crushing and distorting carefully compiled beats.
twisting the sounds with feedback and delay.
deconstructing compositions until the point of no return.

a reflection of industrialisation.
darkness and violence entwined with rhythm and destruction.

iridium REV. is a minimalist beat driven project that continues with a more barebone take on electronic music than it's chaotic predecessor aluminum:foil.
Back in 2011 when the first seeds of aluminum:foil were sown, it was just supposed to be a industrial metal project. One thing turned into another and soon it was a synth project, then a glitch project... then chaos.
All good things must come to an end, so hereby we call rest in piece for aluminum:foil and awaken iridium REV. 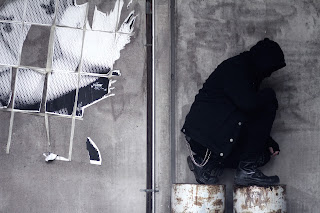